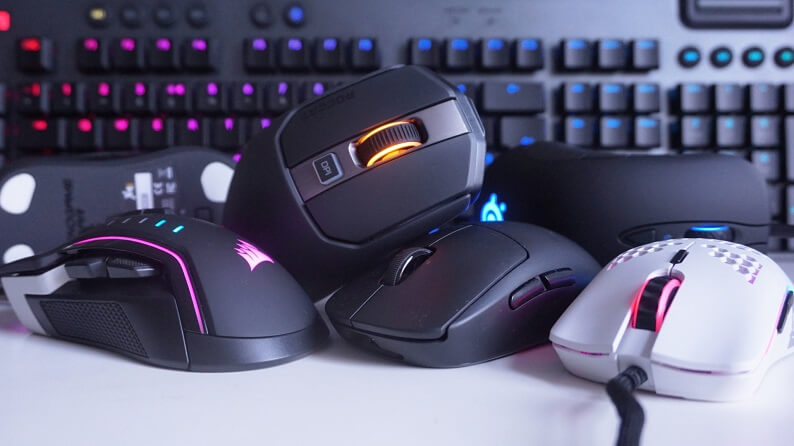 A good gaming mouse may not significantly improve your game skills. However, the best gaming mouse can still help in some aspects: high pointing accuracy, programmable buttons, customizable macros, and many other features that are great for gaming.

Imagine that when you are playing a game, you had already completed a series of operations by just a mouse click, while your opponent is still tapping various skill combination keys on the keyboard. That’s why the best gaming mouse is a necessity for every gamer.

There are many gaming mice on the market for us to choose from, but we have no idea how to choose. So, we made this gaming mouse brand leaderboard, I hope it will help you make the smartest choice.

Each gaming mouse brand score is based on basic performance, comfort, auxiliary function, after sale service.

The rate of gaming mouse basic performance depends on: sensor, micro switch, scroll wheel and buttons. The most important of these is the optical sensor. An excellent sensor not only has a larger DPI value range, but also has more accurate positioning, which can effectively improve gaming experience. At present, high-end sensor manufacturers mainly include Pixart and Philips. In terms of stability, Pixart is better. Micro switch affects button click feel and times.

The most common problem with gaming mice is clicking button, even the top brands gaming mice cannot avoid such failures. Users cannot repair by themselves, so the warranty period and after-sales outlets are the factors to consider when purchasing a gaming mouse.

In addition to the well-known grating scroll wheel and button tension expansion system technologies. Logitech had also led the mouse technology revolution many times, including the invention of the world’s first optical-mechanical mouse and the first wireless gaming mouse. Its G series gaming mouse: G302, G402, G502, G602 had won many international awards, such as the German iF Design Award, Red Dot, and CES Innovation Award.

Logitech has many G series gaming mice, from the entry-level G100, the mid-range G400 to the high-end G900, each series includes FPS, MMO, RTS model.

Logitech G102 is an entry-level gaming mouse. It uses CGS (Coherent Gradient Sensing) optical sensors. The left and right buttons use Omron 7N (10M) micro switch which has 10 million clicks durability. It can cope with most games. But overall it is not as good as other entry-level gaming mice.

Logitech’s mid-range gaming mouse such as G304 and G403 are more cost-effective, with prices around $35. Their micro switches have been upgraded to Omron 7N (20M), and the sensor also uses more advanced models. G403 is equipped with a PMW3366 sensor, which is the same as the high-end G703 and G903.

The popular G502 has the same micro switch and sensor as G403, but the naked weight has reached 147g. The best gaming mouse weight is between 90-120g. G502 is not suitable for most users, consider carefully when buying.

G903 adopts Pixart PMW3366 sensor, Omron 50M blue dot micro switch (50 million clicks). It is comfortable and durable, and the basic performance is at the top level. In addition, G903 is an ambidextrous gaming mouse, which can be used as a wired or wireless mouse. It uses Logitech LIGHTSPEED wireless technology, which features low latency and strong anti-interference ability. With the wireless charging mouse pad, it can be “charged while using”. G903 is priced at around $129, and the wireless charging mouse pad needs to be purchased separately, priced at $30.

G703’s basic configuration is the same as G903. But G903 is an ambidextrous design, G703 is right-handed, and G703 has only 2 side function buttons, which is less customizable than G903. But the price is only $93, it worth be recommended.

Razer holds 31% North American gaming mouse market share and has more than 3 million users. It’s the first company to offer ambidextrous gaming mice: Razer Lachesis. Till now, Razer DeathAdder gaming mouse is still very much loved by players, it has been rated as the best gaming mouse by many media.

Razer uses snakes name to categorize its gaming mice, such as:

Each of these series has wired, wireless, or customized models. These 3 Razer gaming mice listed below are our highly recommended.

Entry-level Razer Krait 2013 is the best RTS gaming mouse under $30, it equipped with an Avago S3988 sensor, Omron 7N (10M) micro switch. It has a small size and lightweight, it is one of the best choices for RTS games under $30.

Razer Mamba HyperFlux is similar to Logitech G703 and G903 gaming mice. They all use the Philips sensor, which has high requirements for mousepads.

Steelseries is good at cooperating with professional e-sports players. It has the highest appearance rate in e-sports competitions and is well-known in the e-sports circle.

Steelseries mice currently on sell, except for the Rival 700, basically have the problem of DPI interpolation (which using a software algorithm to make sensors DPI value exceed its real physical DPI value). This does increase the parameters, but in some scenes that require the mouse to move at high speed, it will cause a monitor drop frame problem.

Steelseries Rival 100 gaming mouse is an entry-level, priced at $15.99. It equipped with S3059 sensor and 30 million clicks micro switch, just basically daily use.

Rival 300s upgrades its sensor to TRUEMOVE1 (a customized version of PMW3325) and adopt Omron 7N (20M) micro switch. It is large in size and suitable for players with larger hands.

There are many function buttons on the side of the Rival 500 gaming mouse, which are especially suitable for MMO games. Different from other MMO gaming mice phone dial buttons design, the Rival 500 has redesigned the side button layout, which reduced the possibility of misoperation. At the same time, this layout does not hinder the normal placement of the right thumb, making the Rival 500 equally capable of FPS and RTS games. The price is $79.99, which is a good mid-range MMO gaming mouse.

Its flagship Rival 700 series gaming mice have received many praises since its release. It had been reviewed as the best gaming mouse in many well-known media.

The highest-end Rival 710 gaming mouse TrueMove3 sensor and 60 million clicks micro switch have reached the top level. Its feature is that it has an OLED display at the front of its left side, which can display parameters such as DPI or custom patterns and text. It is the first choice for personalized players.

ROCCAT is Germany’s top peripheral brand, founded in 2007 by a group of game enthusiasts. Due to the short establishment time, high pricing, insufficient brand promotion, and other reasons, its popularity is not high.

Unique shell coating makes the ROCCAT gaming mouse have a very good touch feel, it is better than ordinary matte material, and more durable than skin-like materials. Based on this, ROCCAT gaming mice had won the favor of some game players.

ROCCAT entry-level gaming mouse is more expensive than others. We recommend you to buy models above Kone Pure.

The most unique feature of the ROCCAT Tyon mouse is its X-Celerator thumb-paddle, which is different from the traditional click-type buttons. It is operated by the thumb waving up and down. With the driver software, you can customize a variety of command capabilities. But Tyon’s size is too large, and the weight of 128g is not good for RTS and FPS games.

Corsair’s best-known gaming mouse is Harpoon. It has a simple appearance and few functions but has been selected as one of the best gaming mice due to its high cost-effective performance. However, Harpoon has serious quality control problems.

GLAIVE was the Corsair flagship gaming mouse, which uses the Pixart PMW3367 sensor and Omron Blue Dot 50M micro switch. PMW3367 is a custom model of PMW3366. Its price is $69.99, very cost-effective. The interchangeable thumb grips can bring a more comfortable gripping experience. But the large size, heavyweight, and poor feel of the side buttons are factors to consider before buying.

Zowie Gear was founded in the United States in 2008, then it was acquired by BENQ Corp. Unlike other gaming mouse manufacturers, Zowie only focuses on FPS gaming mice, with professional FPS players participating in the tuning.

For non-FPS gamers, Zowie gaming mouse is not attractive. The unpretentious appearance makes it difficult to associate it with a gaming mouse. There is no RGB lighting, no front DPI adjustment button, no function buttons, and even no driver software. We only recommend FPS players to buy it.

G.SKILL is known for its high-performance gaming memory for years. Its gaming mice have 512KB on-board memory and can store 5 sets of custom command settings. The settings are stored inside the mouse and you can use them on different computers.

G.SKILL currently on a sale gaming mouse is MX780. The interior is equipped with two 4.5g additional weights, which is convenient for adjusting the center of gravity. G.SKILL is very thoughtful that they made side grips for both right-handed and left-handed users.

Come with me on my journey to find the best gaming mouse!

Thank you for all the support and I truly appreciate you stopping by.